In April 2021, Neuralink released a video of Pager, a macaque monkey, playing a computer pong game with their brain [1]. The N1 Link, a fully-implanted neural recording and data transmission device with 1024 electrodes, allowed Pager to play pong by using patterns of their neural activity to model the movements of a computer cursor [2]. There are many ethical considerations associated with brain-computer interfaces and their use with animals, such as physical harm and psychological distress [3]. Here, we will focus more generally on the ethical challenges of the brain-computer interfaces Neuralink is developing and the global attention that Pager has drawn to neuroethics.

Elon Musk founded Neuralink in 2016 with the mission of merging humanity with artificial intelligence. Neuralink aims to achieve this through designing and building wireless, implantable brain-computer interfaces to help improve treatments for neurological conditions such as Alzheimer’s disease and dementia [4]. As shown by Pager’s ability to play a game using their mind only, Neuralink is quickly progressing closer to its goal of enhancing brain function by integrating artificial processing [4].

The ongoing development of neurotechnology is pulling some key neuroethics topics into the limelight [5]. As Neuralink’s video of Pager gained popularity online, more and more individuals began expressing interest in the potential implications of neurotechnology [3]. On social media platforms, people are engaging in neuroethics-related discussion threads [6], bringing increased attention and perspectives to topics often discussed in the field. Examples of topics include data privacy concerns, safety issues, and considerations around how brain technology may influence behaviour [5].

Renewed public interest in the ethical challenges of these technologies stresses the importance of ethical and socially responsible research and development [5]. One key ethical consideration is the tradeoff between potential benefits and adverse effects of neural implant devices. As the use of neurotechnology may move from remediation to enhancement in the future, this risk-benefit calculation may become more complicated and must be further scrutinized [7].

The use of brain-computer interfaces also raises questions about who owns an individual’s brain data. Important issues include who has the right to write data to implanted devices and how developers can ensure privacy and security during the use of their devices [7]. Whether or not BCIs can be developed to enhance what a person can achieve, there are already concerns around how social equity and access will continue to be impacted. Further developments will likely continue to exacerbate health inequalities, making these questions even more important to answer [3].

In the future, brain-computer interfaces may transform approaches to treating neurological conditions and even move to performance enhancement. It has been suggested that the success of these technologies may depend on multiple factors [7]. These components may include the willingness of innovators to prioritize ethical innovation drawn from interdisciplinary expertise [7], and regulations and policies that prioritize individual and societal wellbeing.

uroessentialists, it’s immediately obvious that our brains control our weight. In a direct way, the brain regulates appetite, and feelings of hunger and satiety. In a more subtle way, the complex associations between motivation, reward and emotions can lead to behaviors such as emotional eating. In a third, even more removed way, our perception of taste can be altered by several stimuli. A recent study highlights this changing taste perception with a clever experimental paradigm in children.

The researchers were interested in assessing if placing the image of a popular character on the packaging of a product (this marketing ploy is called “character licensing”) is an effective way to sell food to kids. To test this, the researchers studied three foods: graham crackers, gummy bears and baby carrots. The participants in the study, children aged 4 to 6 years old, were presented with two packages of the same food item (for example, graham crackers). The only difference was that one of the packages had a sticker of a cartoon character (Scooby-Doo, Dora or Shrek) on it. The kids were then asked to say if one of the two foods tasted better, and if so, which one.

Are children that oblivious to this obvious and dubious marketing trick? Absolutely. Overall, children perceived the food items with the cartoon on them to taste better than the ones in the plain packaging. This finding was statistically significant for the “junk” food (the crackers and the gummy bears). As it turns out, character licensing is especially effective in children because they lack the ability to understand that the advertisement is meant to be persuasive. You would think that all you would have to do to solve the obesity crisis is to paste Elmo’s face on broccoli and apples, but the fact that the character licensing experiment didn’t work as well with the carrots suggests this wouldn’t necessarily do the trick and adds a level of complexity to this type of marketing.

What does this all have to do with neuroethics? This experiment acts as a stepping-stone for one of the latest “neuro” words to be coined: neuromarketing. What will happen when the food industry knows exactly which buttons to push for us to consume what they are selling? How can neuromarketing impact our notion of free will? Will neuromarketing eventually expand beyond the consumer market and become a form of mind control (neuropolitics)?

Your thoughts in the comments! 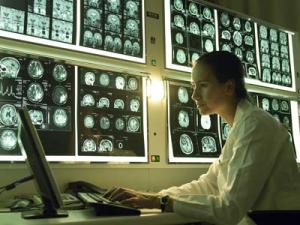 nsion is mounting between research, medicine and patient communities whose lives are affected by multiple sclerosis (MS).

Fuelled by media coverage of individual success stories of a still-unproven treatment and testimonials on social networking sites on the Internet, the methodological pace of science necessary to ensure safe and effective cures is being challenged by the need for speed for the 55,000 to 75,000 Canadians who suffer from this devastating disease.

The need is real, but the proof is still lacking.

The problem has become acute in the face of a recent pilot study carried out by Dr. Paolo Zamboni and his team in Italy. END_OF_DOCUMENT_TOKEN_TO_BE_REPLACED

Those of you familiar with the Bible will remember the famous words uttered by Pontius Pilate, the judge at Jesus’ trial, as he washed his hands in front of the crowd: “I am innocent of this man’s blood; you will see.”

While I have no intention to change my name to Religious Chick, I just wanted to point out that the link between physical and moral cleanliness goes back, waaay back. In a fascinating recent study published in the journal Science, researchers attempt to investigate an aspect of this link.

To better understand the study, you must first know the word(s) of the day: postdecisional dissonance. When you have to make a choice between two options that seem equally good (say, having lobster for dinner versus having King crab for dinner), you enter a state called “cognitive dissonance”, which essentially means that “I can’t decide!” feeling. In order to get rid of this uncomfortable feeling once you made your choice (say, crab), your mind does this funny trick where it now perceives your choice (the crab) as way better than the alternative you rejected (the lobster). This happens even though initially, you thought crab and lobster were equally attractive. This little mind trick is called postdecisional dissonance, and it’s been well documented. In the recent study, the researchers wanted to find out if washing your hands can affect this postdecisional dissonance mind trick. END_OF_DOCUMENT_TOKEN_TO_BE_REPLACED

What does it mean to act morally?

Is it to cause benefit and not harm? Is it to do what’s right? Who gets to decide what’s right? While philosophers have been debating these questions for millennia, neuroscientists are now joining in the fun. In recent years, researchers have been taking pictures of people’s brains while moral judgments are being made to try to make sense of it all. In a recent article published in PNAS, a team of American researchers tried to find where morality lives in your brain.

The researchers used a technique called transcranial magnetic stimulation (TMS, see picture). In short, it consists of placing magnets near the participant’s head and applying a magnetic field targeted at a specific brain region. The current generated by the magnetic field can pass through the skull and disrupts the targeted brain region. The whole thing is non-invasive and not painful.